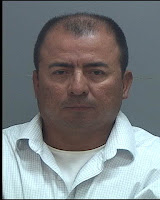 A member of the Church of Jesus Christ of Latter-day Saints has been released from his calling as branch president and faces the prospect of additional Church discipline in the future after being arrested and charged with a number of serious offenses. Efrey Antonio Guzman, who was the president of the Spanish-speaking Union Park Ninth Branch in Midvale, Utah, was released from his calling after being arrested and charged with one count each of aggravated sexual assault, aggravated burglary, sexual abuse of a child, and forcible sexual abuse. This post is compiled and summarized from stories in the Salt Lake Tribune, KTVX Channel 4, KSL Channel 5, and KSTU Channel 13.

Update May 23rd, 2014: A jury found Guzman not guilty on all counts in this case. The jury, which had been deliberating for just over three hours, ruled that Guzman was not guilty of four felony counts with which he was charged: aggravated sexual assault and aggravated burglary, both first-degree felonies, and sex abuse of a child and forcible sexual abuse, second-degree felonies. The title of this post has been modified to reflect the verdict.

Update February 4th, 2013: After nearly three hours of witness testimony, a 3rd District Court judge ordered Guzman to stand trial; he will be arraigned on February 22nd. However, defense attorney Bel-Ami de Montreux pointed to numerous inconsistencies in the family’s testimony as proof of its unreliability.

On August 2nd, Guzman's 13-year-old victim noticed Guzman circling the street near her home at 4500 South and 345 East. She ran inside to tell her mother that Guzman was outside, after which the mother locked herself in a bedroom and called for help. Guzman, who was allegedly a family friend, knocked on the door asking to see the girl. The mother refused to let him in and told him to leave. Guzman pushed his way into the house and attacked her, ripping her shirt and grabbing her exposed breast. When the mother called out for help, her son came into the room. As the son was trying to pull Guzman off his mother, Guzman attacked the son, grabbed his penis from his boxer shorts and bit his penis, causing severe damage that required surgery.

This is not the first time the family's had an encounter with Guzman. On May 8th, Guzman visited the house; when the girl answered the door, Guzman suddenly grabbed her, hugged her tightly, started kissing her on the mouth and grabbed her buttocks. The girl’s 20-year-old brother walked into the room, and Guzman left. The incident was not reported to police, which is a bit strange since Guzman was not the family's spiritual leader (they are members of a another ward headed by Bishop Kent Kuhn).

In response, LDS Church spokesman Scott Trotter wrote, "The church has zero tolerance for abuse of any kind. Mr. Guzman has been released from his church duties effective immediately and faces further church discipline following the legal process." This is consistent with the way the Church has handled other similar cases; release them immediately from any sensitive callings, but delay action on membership until guilt is established in a court of law. This policy effectively balances safety with the judicial presumption of innocence.

Because of Guzman's Hispanic-sounding name, some commenters wondered about his residency status. Guzman's booking record shows he's a U.S. citizen who was born in Colombia. Although he has no prior criminal record, he's being held on $300,000 bail; his first court appearance is scheduled for Friday August 10th.
Posted by Jack Mormon at 12:14 AM

I live in the Union Park Stake. The distinguishing between the Sandy and Midvale boundaries is tricky. I live within Midvale but am zoned for Sandy. The Union Park Stake (the spanish branch covers the whole stake) is in both Sandy & Midvale.

Thanks for your input, Dustin. That would explain why different media outlets are reporting differently on that issue.

My family and I are friends of Efrey Guzman and we know that he wouldn't be capable of committing such a crime. Anyone who knows Efrey well enough knows that he is a kind man who loves his wife and would never even think of doing such an aweful thing to a family.

What a idiot ruined the representation of Latinos in the church.

This is a lie. This man is innocent and was beaten and abused by an illegal refugee family from Haiti looking to sue the church and gain residency. Check up on the new info for the truth.

I know the family that was attacked and they are not illegal refugees. They are good upstanding people that had come here from Florida where 3 of them lived for many years. Only the son is from Haiti but he is not illegal. This has been a terrible ordeal for this family and they have no intention to sue the church. You had better check your facts before putting it out there. He did those things that the paper said, but his second statement was a lie as I have talked to the neighbor and they were witnesses to a lot of it and the man surely has some problems that he has kept secret from the Church authorities.

-- View mobile version of this blog

Jack Mormon
I'm a Jack Mormon - which means I believe it, but don't practice all of it. Why do I stay with Mormonism? Because it answers more of my questions and offers me more possibilities than any other denomination or faith. All religions contain varying amounts of the truth - I just believe Mormons have more of it than anyone else.